Amtrak Kansas City To Chicago: What You Need To Know 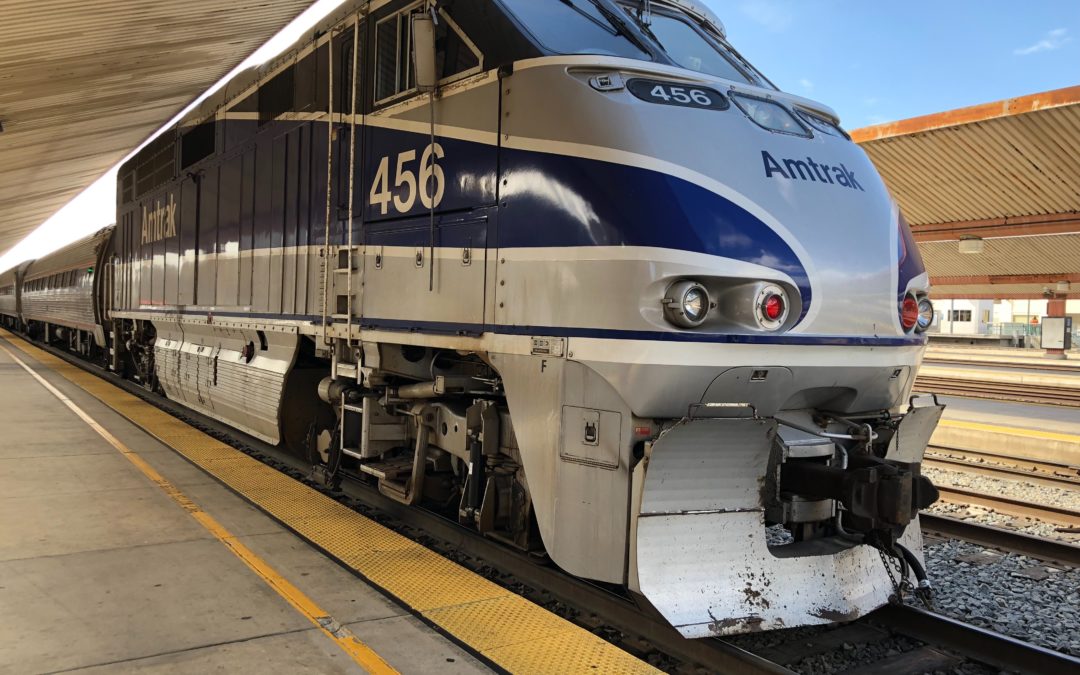 I was/am new to train travel, and excited to take a train to Chicago from Kansas City. But there are things I wish I would’ve known before I took the trip. All in all it was a very positive experience, but there are a lot of things Kansas City and/or Amtrak could improve.

Some suggestions when taking the train:

First, the train was 4 hours late arriving to Kansas City. We learned they knew way ahead of time, which meant they could’ve alerted all travelers sooner then they did. I could have slept in instead of waking up at 5:00 AM, but at least I didn’t have to scurry out the door, once I was alerted. I was able to have some coffee, read the paper, and more before I left for the station. We got there early enough to have breakfast and the waitress told us that the train is late all the time. That was disheartening news. Our breakfast at Harvey’s was very good and I was still excited for our travel.

When we got ready to line up for train, people were standing in line, spilling out into the open areas, then directed through a long area outside, then down an old decaying long stairwell to get to the train. They have one elevator. Come on Kansas City, are you serious? And it is uncovered, so in the wind, and the rain and snow you are unprotected, walking very slowly with your luggage then stand and wait til someone tells you where to sit.

Thankfully, this trip was in the spring, so we didn’t have any inclement weather, but this definitely detours me from taking the train anywhere in less than “perfect” weather. Then there was a “guy” yelling at people getting them in groups and telling us where to sit. He was actually kind of rude about it, frustrated and sarcastic. Seriously, this could have been made much easier, perhaps count a number of people and tell them which car to go into or something other than yelling and being snarky?

Once into the car, you have to carry your luggage up a tight spiral staircase, get to your seat, and put your luggage above your seat in the areas provided.

The seats were great. We had tons of leg room, a foot rest and even a nice cushion recliner for your legs. You can recline your seat quite a ways and be very comfortable. 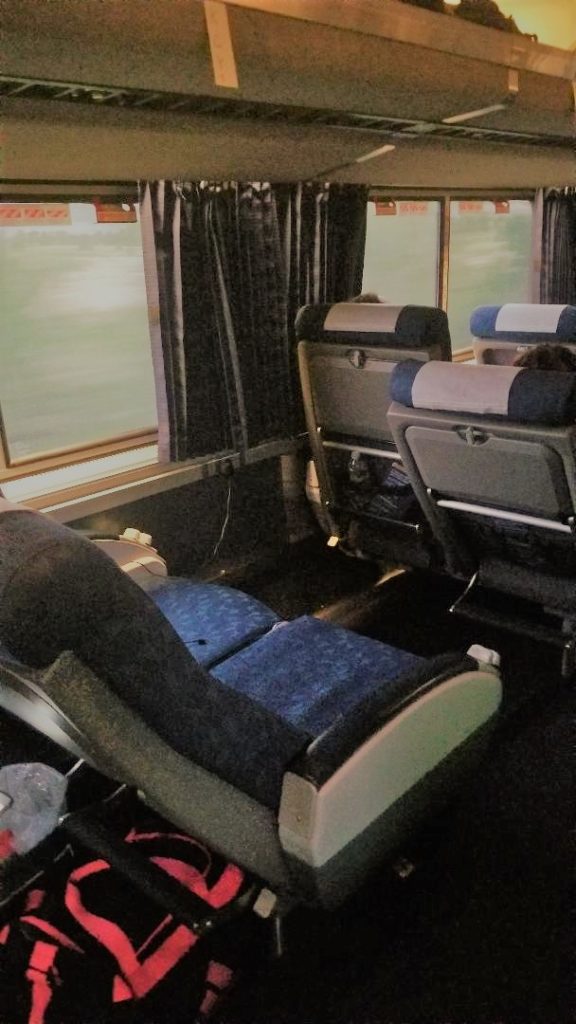 The staff inside the train were helpful, polite, professional and personable. We enjoyed the train ride. There is a nice observation car you can ride and watch the world go by. They also have tables where you can play cards or work comfortably, but it quite loud in that area. It’s nice to just check it out. 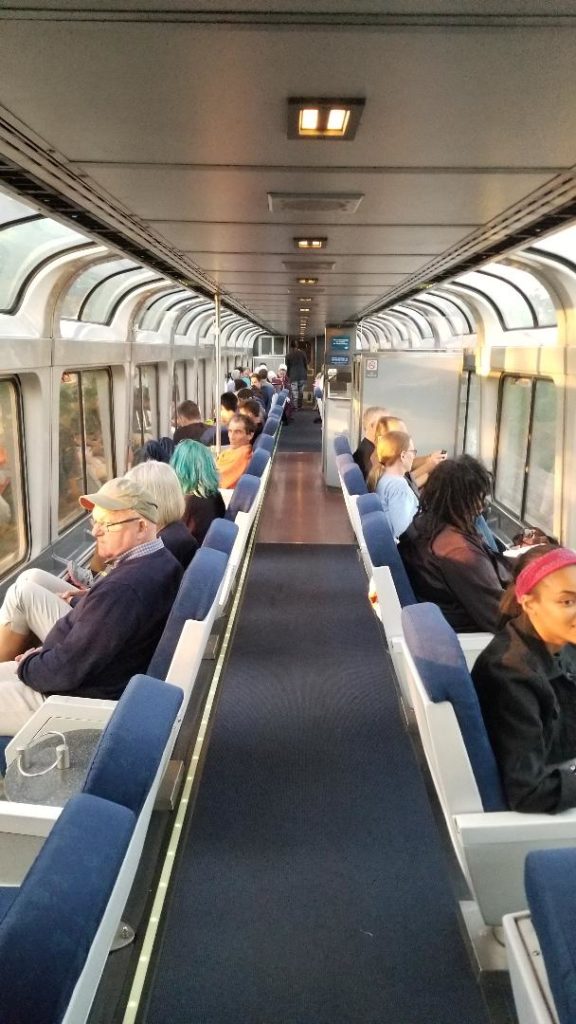 Observation Car – Sit, relax and watch the world go by.

They also have a dining car and a snack car where you can buy drinks and snacks.  The only negative was they were out of several items. So, you can bring your own food and drinks, but it would be nice to have some options. We were prepared for our trip back. 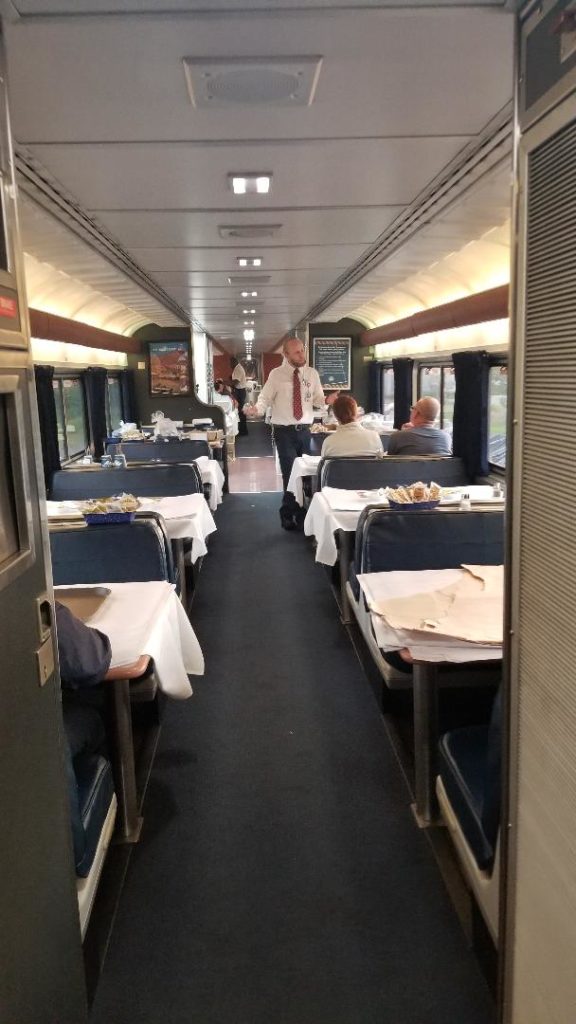 Dining car – A nice place to have a good meal and relax.

They also have sleeper cars. We did not take one on this trip. I am assuming they are really nice since our seats were great. Next time we travel by train we will try out the sleeper car and let you know what we think.

Some suggestions when taking the train:

Our return trip had no delays, the Amtrak employee giving seat assignments was much more calm, cool and quick about giving us direction. When we lined up they had us move quickly, no stairs to haul our luggage, and we were covered from the elements which was very nice.

We would definitely do this trip again especially if the train was on time and in good weather. Kansas City’s Union Station is amazing and gorgeous, they have several events a year, with nice restaurants and venues. It would be nice if they had a smoother and effortless path to get down to the train platform or at least have it covered from the elements.

My next post will be what awesome fun things you should not miss when visiting Chicago.