St. Louis: The Gateway to the West 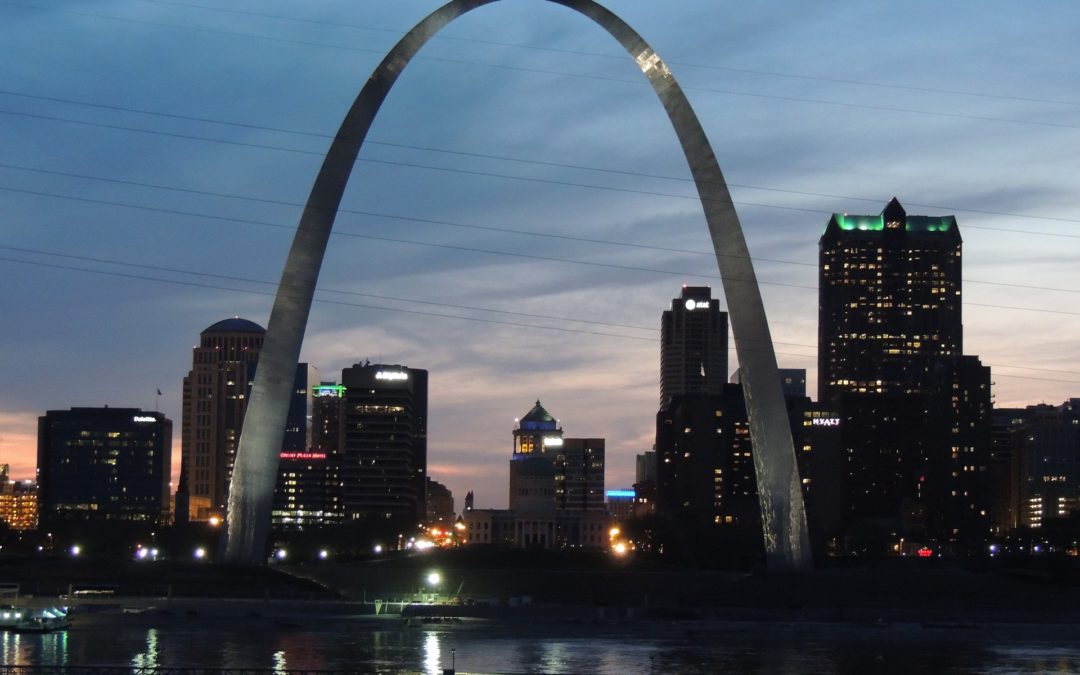 St. Louis has always been known as the Gateway to the West, and for good reason. The city is located on the western shores of the Mississippi River—the river that traditionally divided the United States between East and West. Once one of the largest and most important port cities in all the world, St. Louis has become more relaxed. However, echoes of the city’s history resound proudly and show in the many fascinating features of the culture; you can hear it in the Blues, taste it in the pizza, and see it in the parks and museums all around the city. St. Louis is the sort of city that pulls you in; once you’re there, you have to enjoy what it has to offer.


Traditionally a major hub for trade and commerce, there are many paths that lead to St. Louis. While many find themselves passing through St. Louis on road trips, others find themselves docking in one of many ports still operational in the Mississippi, arriving by bus or rail in Union Station, or flying in through Lambert International Airport. The Airport is located just a 25-minute (14 mile) drive from downtown. Once you’re in St. Louis, there are many ways to get around. The public transportation system uses light rail and urban bus; for $7.50, you can get an all-day pass to use public transportation. Recent improvements and accommodations in infrastructure have also made it easier to bike around St. Louis.

The one thing you must absolutely see if you visit St. Louis is the Gateway Arch. Towering 630 feet into the sky, the gateway arch is visible from nearly anywhere in the city. Beneath the arch, burrowed underground, you are able to purchase tickets to go up the arch and also visit the basement museum. In the museum, you can discover St. Louis’s role in westward expansion, as well as more about St. Louis’s history and the history of the Arch.

Riding up the Arch Elevator takes nearly ten minutes, but it’s worth the wait. The small observatory at the top features a window on either side, from which you can view the entire city in all its dizzying grandeur. From the eastern window, you can see the glittering Mississippi river stretch into the distant horizon. From the western window, you can see all of St. Louis spread out like a map, which is a good way to get a feel for the city. To the left, you can see Busch Stadium, home of the St. Louis Cardinals baseball team, and in the center you can see all the way down the gateway mall and into downtown.

Baseball games at Busch Stadium typically start during mid-March for spring training, but the regular seasons starts on during April and lasts until late September. Tickets range in price from $75 USD to $399. Even if baseball isn’t your favorite sport, the thrill and energy of the crowd during a home game at Busch stadium can be a wonderful and exhilarating experience.

After having viewed the city from the top of the arch and seen a baseball game or two, consider checking out some of the other local museums. The St. Louis Science Center is a great option if you are travelling on a smaller budget, since it is one of the only science museums in the United States that offers admission free of charge. The Science Center holds a variety of travelling and permanent exhibitions year-round, as well as an planetarium, telescope, and theater. The Science Center is located right on the edge of Forest Park, which is also home to several other key landmarks in the city.

There are many tours you can take in St. Louis—in fact, many of the museums, monuments, and landmarks offer guided tours for specific locations. For instance, one tourist agency takes you on a bicycle tour through Forest Park in St. Louis. Or, if you are a bit more adventurous, you might consider making a picnic of it and stopping at each of the landmarks located around the park.

Besides the science center, you can also visit the St. Louis Art Museum (located close to the center of the park), the Municipal Theater Association (the largest outdoor musical theater in North America), and the Missouri History Museum. Exploring everything in Forest Park can easily take a day or two. The rivers winding through the park really gives you a sense that you are closer to nature in the big city.

While St. Louis has a few other important parks, the next most noteworthy you must see is Tower Grove Park. Tower grove park also provides a beautiful space for picnics, recreation, and even provides carriage rides and weekly seasonal farmers markets. While the park is a nice place to get out and stretch your legs, its proximity to the Missouri Botanical Gardens is what truly makes it a special attraction. The Botanical Gardens are some of the oldest in the United States, and offer special treats that you cannot see anywhere else in the world; of particular note are the Japanese Gardens, which offers a three days festival during Labor Day weekend.

Now, while the gardens, museums, rivers, and parks are wonderful, perhaps you want to experience the music of St. Louis. Jazz, Ragtime, and Blues all started out along the Mississippi River, and as we’ve seen, St. Louis is a city committed to preserving and proudly displaying its culture. Besides showing permanent interactive exhibits and a traveling exhibit, the National Blues Museum also hosts weekly shows with a variety of well-known bands and performers.

Blues City Deli is also a great place to catch live performances, with the added feature of being able to eat some of the best local food in all of St. Louis. After having looked at so many neat things in St. Louis, you’ve probably built up an appetite. St. Louis is well-known for is its famous style of thin-crust pizza, cut in square pieces rather than the more traditional triangular cuts. A few locally loved pizzerias include Pi Pizza and Dewey’s Pizza, both which have the prized, yet well-debated style of St. Louis style pizza.

Sports, history, culture, music, food, drink, entertainment—St. Louis has it all. These few places mentioned make up only a fraction of what you can see and experience in the this beautiful city, but they are places any visitor could enjoy.