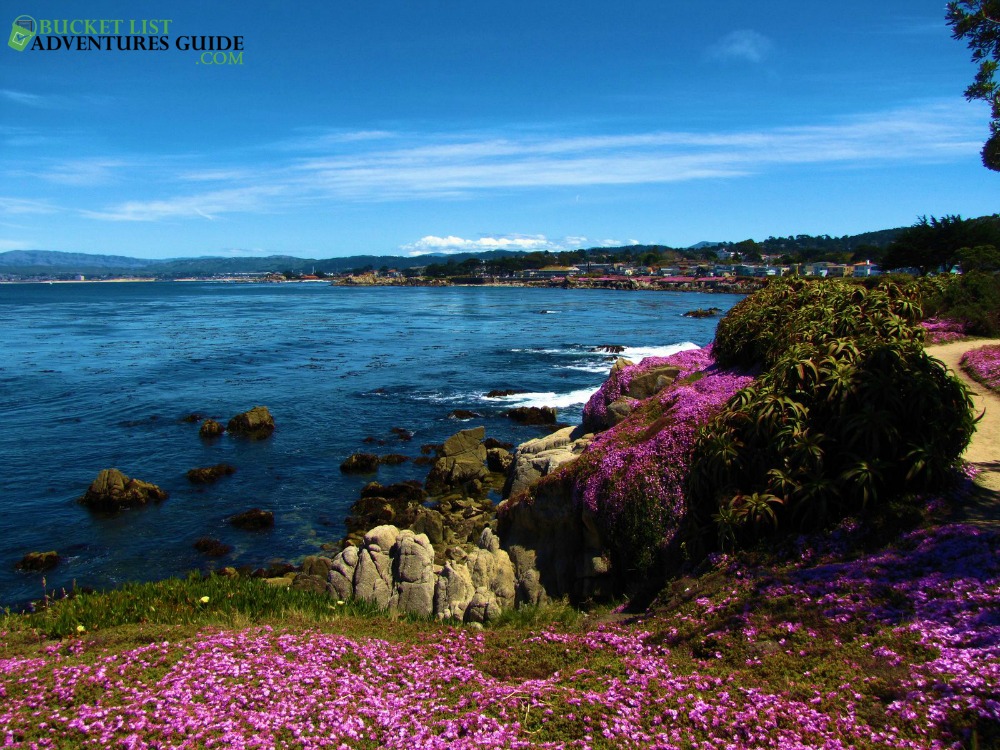 From beautiful beaches and palm trees to sheer cliffs and tall redwoods, this scenic diversity marks one of the most iconic motorcycle rides in the country and a must for any motorcycle riders Bucket List. 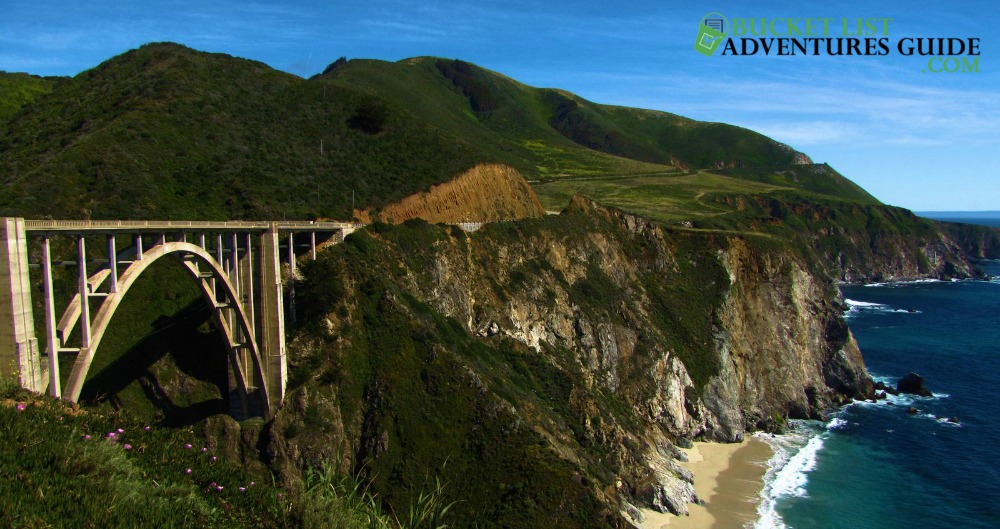 Trivia – The “One” (Pacific Coast Highway)

The “ One “ originally started out as part of the Roosevelt Highway. Opening in late 1929, and named after Teddy Roosevelt, it was part of the first roadway to link Mexico and Canada.

It went through many name changes and was not designated Hwy 1 until 1964.

Officially, starting in the south at Dana’s point, by San Juan Capistrano, you will be riding past some very affluent beach communities as you pass through Los Angeles. 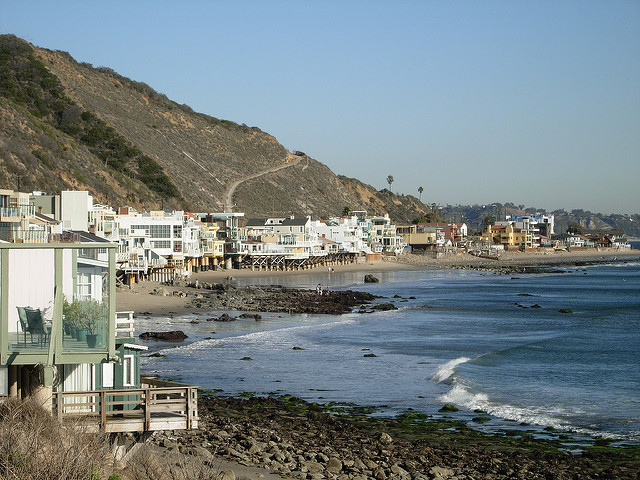 Once you have passed the Big City and Malibu you will start getting into the kind of road that makes this route so beautiful and a great motorcycle ride.

You will enjoy winding along the California coast with hills on one side, and the Pacific ocean on the other.

After you cruise past Mugu State Park, you will be approaching Oxnard. It is here, where the The One takes you away from the coast and joins up with 101 for a short time.

You will be traveling on the Ventura Freeway, which was the inspiration for the hit song by America called “Ventura Highway”.

Between Ventura and Santa Barbara, 101 and 1 are combined most of the time. As you ride through Santa Barbara, there is a really cool alternate route inland.

Jump on Ca 154 north, San Marcos Pass Rd., this will take you up into the hills above Santa Barbara, make sure to stop at the top of the pass and soak in the excellent views of the city and the ocean.

Take Ca 154 north out of Santa Barbara go south on 101 to 246 go west towards Vanderbilt AF base, where you will rejoin the ONE.

246 will take you through Solvang and Buellton. These towns and the surrounding vineyards were the setting for the movie “ Sideways “, and a great place to stop for a few days. Such a fun place and a great movie. 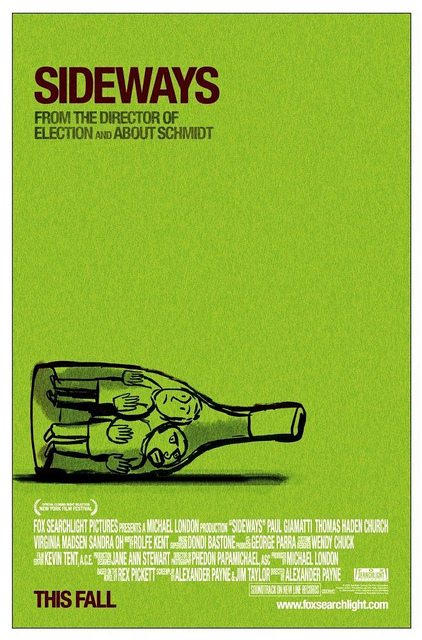 Vanderbilt AFB will have rocket launches from time to time.

As you ride north on 1 you will be cruising by some beautiful farmland. Join 101 and ride to Pismo Beach, where you will finally get to see the Pacific again.

But do not get used to it as you will ride back inland. Stay on 101 till San Luis Obispo. Get back on the One and ride to Morro Bay and finally back to the beautiful Pacific.

Cruise north up the coast towards San Simeon, as you pass through the area make sure to stop and tour the Hearst Castle.

Don’t be fooled, it isn’t a castle but a group of mansions, built by newspaper magnate William Randolph Hearst.

Back in the 1920’s, the Castle, was the place to be seen. Visited with by the likes of everyone from the Marx Bros to Winston Churchill.

Further up the coast, make sure not to pass Elephant Seal Vista Point, stop and check out the hundreds of Elephant Seals on the beach.

So far the ride has been fantastic, but hold onto your bars, the best is yet to come.

The next 85 miles to Carmel is a stretch of road called Big Sur, some of the most scenic riding you will ever experience.

The road twists and turns while literally hanging off the rugged coastline. Take your time, there are many spots to stop and soak in the fantastic scenery and get some great photos. 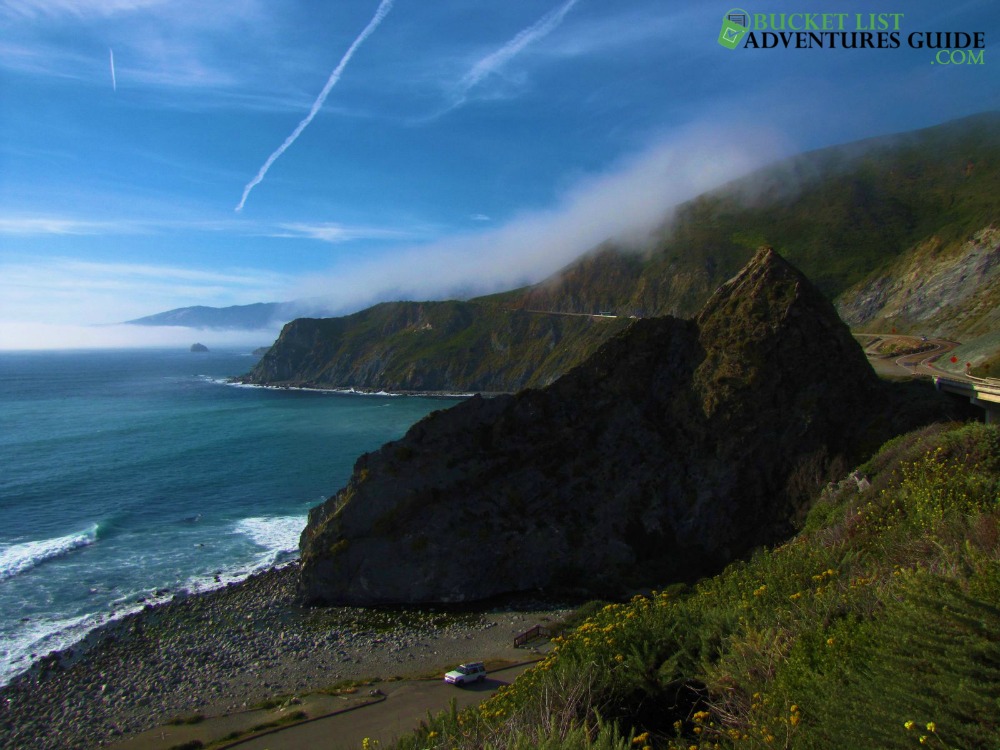 Make sure you do not miss:

Also, even in the summer it can get chilly along the coast, make sure you have packed some cold weather gear.

After leaving Big Sur, you will drive through Carmel by the Sea. If you have time you should stop and spend a little time in this quirky and artistic city. Where there are no street addresses and Dirty Harry was once the mayor.

Stop and play a round of golf at the famed Pebble Beach golf course if you have some time.

Next stop Monterey, a cool scenic town on Monterey Bay. Be sure to take 68 off of 1 to take a great ride around the Bay.

Take 68 off of 1, onto Sunset drive, which turns into Ocean View Blvd. Take this all the way around the Bay. Go left on Lighthouse Ave, jump on Del Monte and that runs back into the One.

The road flattens out as you continue north on The One past Fort Ord Dunes State Park.

You will again veer away from the coast and pass through some fertile farmland. From Castroville, artichoke capitol of the world, to Watsonville, home to some of the sweetest strawberries you ever tasted.

As you rise back up into the hills, you will pass through the beautiful city of Santa Cruz. Make sure that you check out the Santa Cruz beach Boardwalk and Pier. Also, if you have time try to visit Henry Cowell Redwoods State park. Majestic redwoods and the Narrow Gauge Roaring Camp Railroad are a must to experience. Take Hwy 9 north to Henry Cowell State Park. 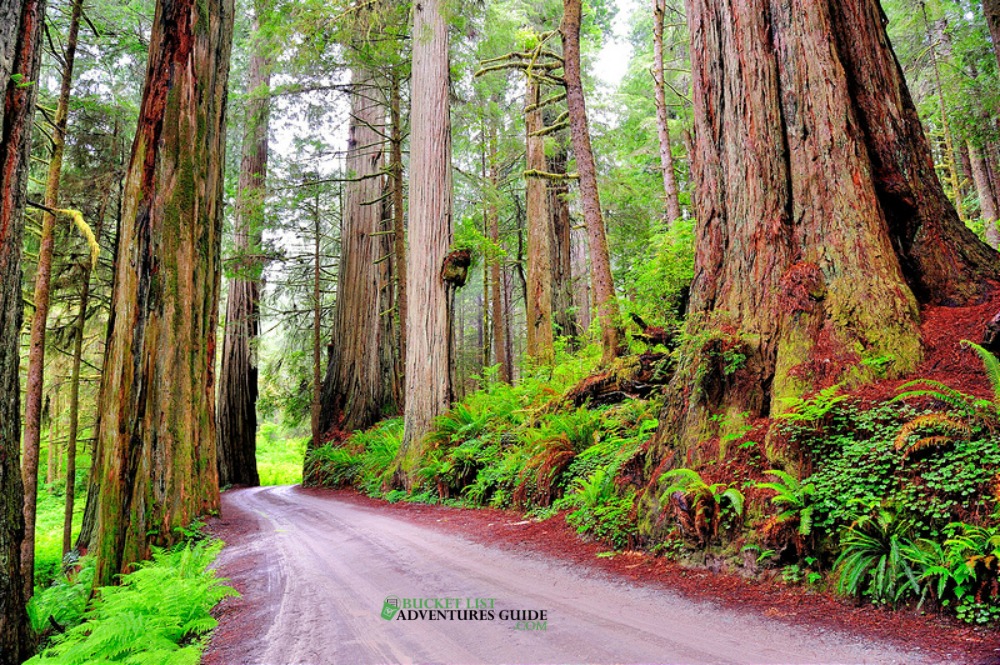 As you cruise north out of Santa Cruz, you will again drive thru some more fertile farmland. Rising back along the One, make sure to stop at Pigeon Point Light Station. Once you leave Pigeon Point ride north towards Half Moon Bay. Home of a famous surf break, Mavericks, and the start of the Devil’s Slide Coast. 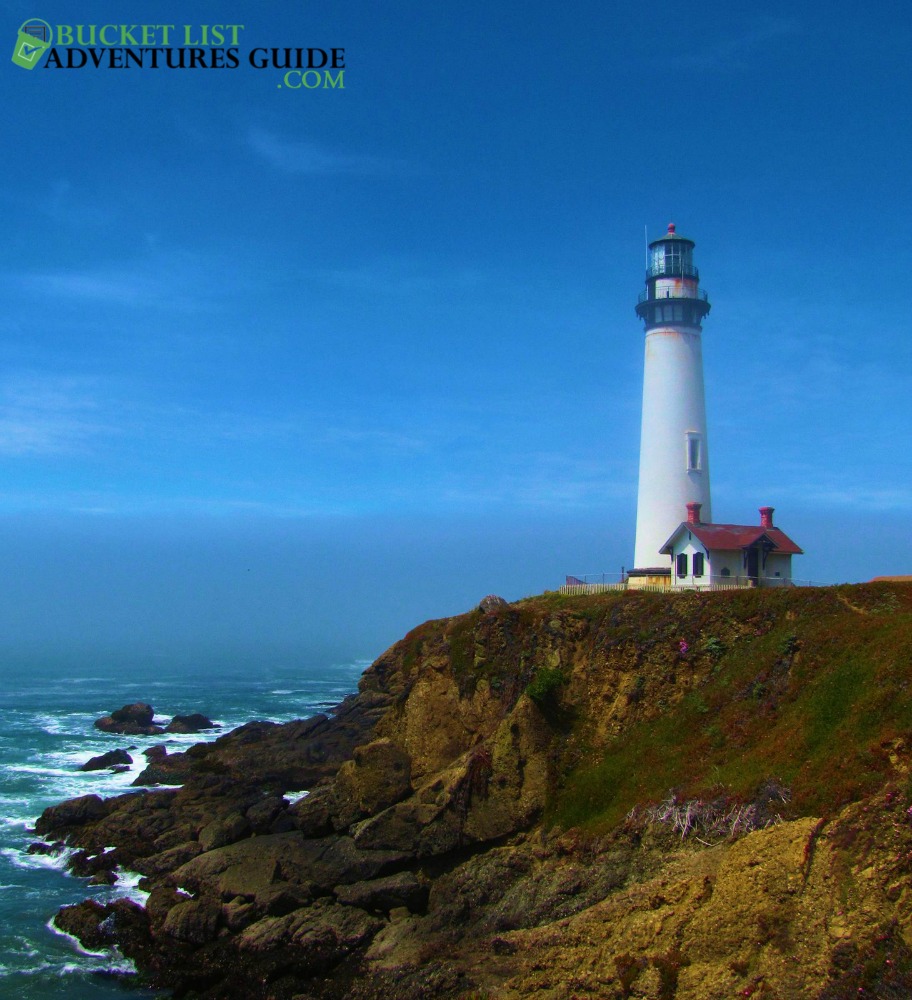 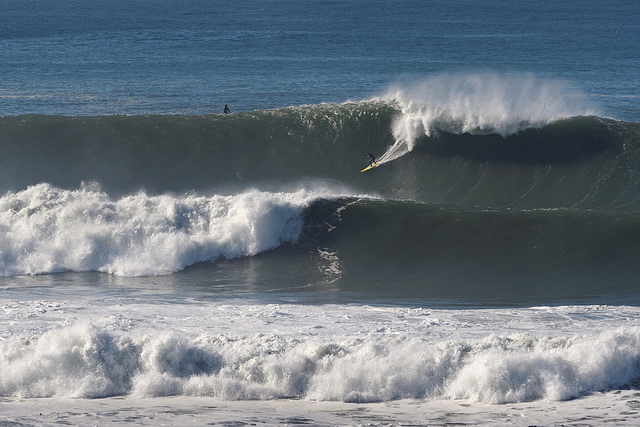 So named because of the many mudslides that haunted the roadway. They became so frequent that a tunnel was built built to bypass the worst part of the of the route.

Make sure that you make time to stop and check out some excellent views along the Devil’s Slide Trail. The parking is located just left off the highway before you enter the new tunnel.

Don’t miss the old Bunker located on a bluff south of the trail parking lot.

Up the road, you will encounter Pacifica, on your way to San Francisco.

You could spend weeks in San Francisco, but you are riding “ The One “. So, stay on your bike and ride over the Golden Gate bridge. 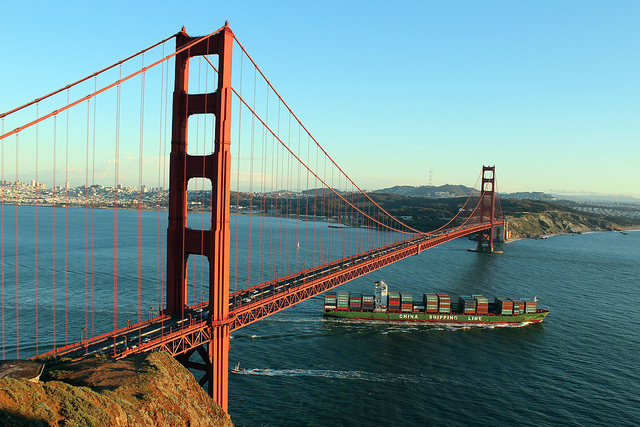 Make sure to stop at Vista point for some great pics of:

Also, take the first exit off the bridge, Alexander Ave. ( 422) go left on Bunker Rd down to Ft Baker, for some excellent shots of Big 3 mentioned above.

After getting some great pictures, drive through Sausalito, a really cool little town on San Francisco bay. Jump on 101 for one exit where 1 swerves back towards the Pacific.

As you wind your way west, take Panoramic Hwy north and visit Muir Woods National Monument. Home to some of the oldest and most beautiful giant redwood trees.

After leaving Muir Woods, stay on Panoramic Hwy until it meets up with 1. Criuse north through the Point Reyes National Seashore.

Try to stop and hike to Alamere Falls. A beautiful and unique tidal Fall, one that falls directly into the ocean.

The road veers on and off the coast till you pass Bodega Bay, then you will be back to the ocean for the remainder of the One.

The Northern California coast is rugged and beautiful with really cool rocky beaches.

As you wind along the coast, there will be many scenic places to stop:

After you pass Hardy creek, The One veers inland to Leggett, where your journey ends as it terminates into 101 for the last time.

The One is 600+ miles of rugged beauty that hangs over the pacific while winding past sweeping oceanscapes.

Cruising through forests of giant redwood trees and city skyscrapers, a true California dream and an absolute “ Must Checkoff “ Bucket List Adventure.